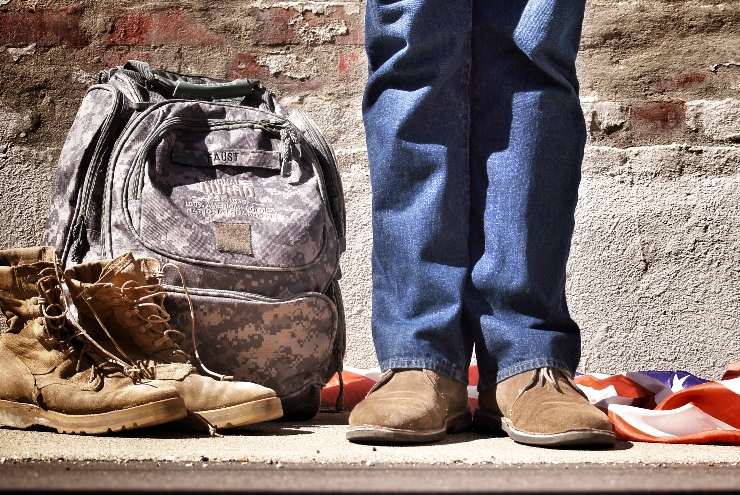 Military veterans are likely to have their post-traumatic stress disorder (PTSD) discovered on social media by hiring agents. Veterans with PTSD tend to be more stigmatized than veterans without PTSD and are less likely to get an interview. They are often judged to be more likely to engage in counterproductive behaviors, such as saying something hurtful to someone at work or acting rudely with co-workers. Wenxi Pu, Philip Roth, Jason B. Thatcher, Christine Nitrouer, and Michelle “Mikki” Hebl offer referrals to organizations and veterans seeking employment.

Millions of military veterans, many of whom suffer from post-traumatic stress disorder (PTSD), are transitioning to civilian life and re-entering the workforce. Veterans are increasingly using social media platforms as tools to find social support during transition. For example, in the United States, the Veterans Administration refers veterans to online communities such as Veterans United, VetFriends, TogetherWeServed, and Iraq & Afghanistan War Veterans to access resources. Simultaneously, organizations are using social media platforms during personnel selection processes, as these platforms provide access to new sources of information about job candidates. A significant number of organizations screen job candidates based on information collected from social media platforms (hereafter referred to as social media ratings). A recent meta-analysis suggests that on average, 60% of recruiters conduct social media reviews. Taken together, these trends suggest that military veterans’ PTSD is more detectable during the hiring process than it has been in the past.

Based on 298 practicing professionals, Study 4 identified peril (i.e. perceptions regarding danger) as an additional challenge (in addition to suspicion) for veterans with PTSD. Perceptions of peril (on the part of hiring agents) were more strongly related to negative reactions such as military veterans with PTSD being judged to be more likely to engage in counterproductive behaviors such as saying something hurting someone at work, acting rudely towards co-workers or embarrassing co-workers. In sum, we demonstrate that military veterans with PTSD are more likely to be stigmatized and are viewed with more suspicion (and/or peril) and are likely to score lower on service-related ratings. ‘hiring.

Second, given our findings and the backlash related to the current popularity of social media ratings, our findings have a number of implications for organizations. Organizations must train observers, recruiters and line managers to avoid making hiring decisions based on (protected) information not relevant to the job. In particular, we discourage the practice of using social media ratings through “hedonic”/playful platforms such as Facebook. For example, organizations could discourage hiring managers or recruiters from consulting these social media platforms during the selection process or, at the very least, offer training programs for recruitment staff on how to systematically conduct screening. social media ratings.

Third, there are crucial implications that suggest the need for a major employment policy or law. Stereotypes about military veterans with PTSD can influence hiring decisions (possibly unbeknownst to hiring managers) during social media reviews. Employment regulation policy and legislation has not yet caught up with technology in this way. Remember that social media reviews can inadvertently identify characteristics of a job candidate that would otherwise remain private and can differentially impact a candidate regardless of the legality of the use of the information discovered in the hiring process. This can be a significant barrier for military veterans trying to secure employment in the private sector. Although a handful of federal employment laws prohibit making employment decisions based on stigmatizing information, recruiters can still be biased by such information during social media reviews, potentially exposing themselves. to claims of disparate treatment or disparate impact (i.e. discrimination may be intentional or unintentional).

We urge organizations to take steps to develop social media review policies that procedurally protect against the influence of stigmatizing information; by doing so, organizations could provide fairer employment opportunities and avoid the legal risks associated with discrimination against people with disabilities (such as PTSD). This will allow them to hire military veterans more fairly.