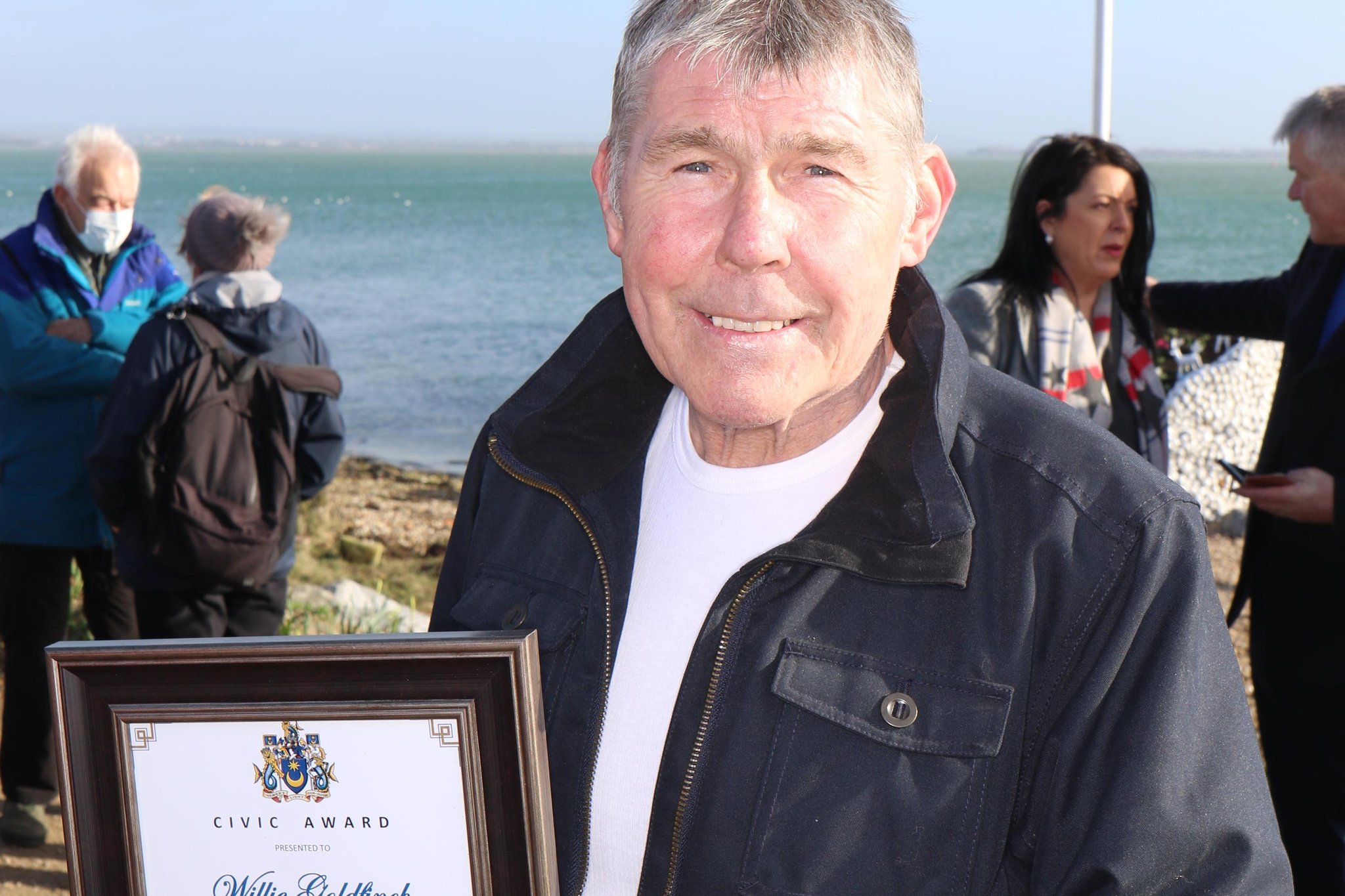 But as Storm Eunice slammed into the south coast, battering the region with winds reaching nearly 70mph, a man worked tirelessly outside to tend to a beloved memorial in the city that he had erected.

Determined Willie Goldfinch refused to let one of the most dangerous storms of a generation stop him from fighting to protect the People’s Memorial, overlooking Langstone Harbor in Milton Common.

Register to our daily newsletter

Willie Goldfinch with his civic award for his work setting up and maintaining the Peoples’ Memorial in Portsmouth. He was pictured on Wednesday before Storm Eunice hit. Photo: Phix-Pix Photo and Graphic Solutions www.phix-pix.com

The proud 68-year-old has worked daily for 15 years to maintain the site after creating it in 2009.

And his remarkable dedication to the memorial and to the city has since been honored with a Civic Award from the Lord Mayor of Portsmouth.

Talk to The news amidst the maelstrom, Willie said: ‘I’ve been there twice a day, seven days a week for 15 years and I’m here today. Nothing will stop me.

“I am proud to be British and will continue to look after the memorial for as long as I can.”

Willie, from Northern Ireland, came up with the idea for a memorial while running along the Langstone Harbor Coastal Path in October 2009.

He was listening to the radio when it was announced that two British soldiers had been killed in Afghanistan.

Overwhelmed with emotion, he stopped at the site of the city’s now beloved tribute and laid the first two stones.

And every day after that he come back, to build on his memorial. The effect snowballed, with residents placing their own stones on the site.

The memorial grew to such a height that Willie decided to take it down and rebuild it – before it became a permanent part of the coastal path.

The monument has since become a place where the community honors the armed forces and their loved ones. It has hosted weddings, school trips and houses the ashes of some 32 people, including Willie’s late wife.

Willie Goldfinch, centre, receiving a civic award for his work setting up and maintaining the Peoples’ Memorial in Portsmouth. Photo: Phix-Pix Photo and Graphic Solutions www.phix-pix.com

Cllr Jonas said: “He is truly amazing. When you consider all those years when he started, he stayed true day after day.

“The man himself is such a modest person that you are very affected listening to his story. He did it for the community… he shows the best of Portsmouth.

The Lord Mayor added: ‘I’m not surprised he’s in the storm. He would be afraid of a stone moving or a leaf falling. I have never met someone so focused and committed. He’s just a wonderful man.

Speaking of the award, Willie said: “I felt truly honoured. I certainly didn’t expect that.

A message from the editor, Mark Waldron

The state will fund ABQ pools, parks and community centers