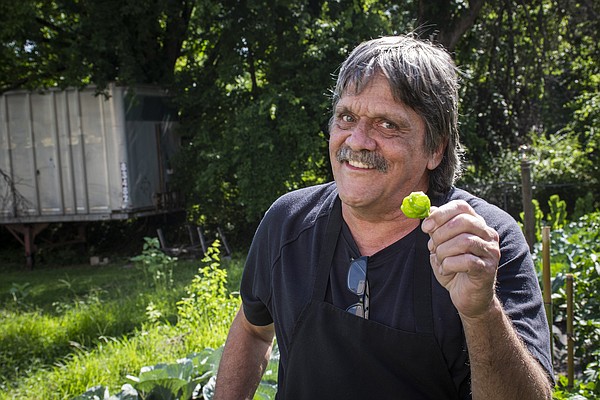 Just behind the administrative offices and dormitories of the Little Rock Compassion Center at 3618 W. Roosevelt Road is a garden that helps supplement the meals served to center residents and community members.

Mark Hughes shows us the terrain about 40 feet by 60 feet on an extremely hot June 13 morning. Hughes, who lives and works at the center, points to the richness the garden has produced this spring.

“We have greens, cabbage, romaine lettuce. There’s an assortment of peppers – jalapeno, banana, habaneros, bell peppers. Then we have 50 tomato plants. Here we have yellow squash and zucchini , Cucumbers.”

At the shady east end of the plot are a few struggling melon plants.

“We were supposed to have watermelon and cantaloupe, but they won’t take off,” Hughes says. “There is too much shade.”

Nearby are rows of sunflowers which attract bees to help pollinate crops.

The Compassion Center, a Christian nonprofit, was founded in 1998 by Pastor William Holloway and his wife, Rosemary, to provide food and shelter to people without housing or reliable access to food. It offers a recovery program for people with drug and alcohol addictions. Other services include job placement, provision of clean clothing to those in need as well as educational services and assistance in accessing social security benefits.

The center, which operates solely through private donations, serves lunch and dinner seven days a week and, in 2021, prepared 183,000 meals, says Holloway. Growing your own vegetables helps offset some of the cost of those meals, especially now that, according to the USDA, food prices are up nearly 10% from last year.

“This garden provides a lot of the food here,” says Holloway.

Hughes, 63, a Little Rock native and recovering alcoholic, arrived at the center in 2005 and started the garden about a year later.

“We have to be self-sufficient,” says Hughes. “Donations are great, but as a shelter that doesn’t receive government funding, we have to support ourselves. What better way to get involved and feed the people of this neighborhood? This place doesn’t is not intended to feed only the people who pass through this program, but the community.

“His whole backyard was a garden and he fed the neighborhood,” Hughes says.

After a relapse, Hughes left the center for several years (he’s back on the program now, he says, and recently celebrated his third year of sobriety). In his absence, the garden was taken over by Henry Sullivan.

“God gave him the gift of gardening,” says Hughes.

“If you’ve ever seen anyone with a green thumb, it’s Henry,” Holloway adds.

Sullivan, 65, first came to the center in 2007, struggling with drug addiction.

“I came there with problems like everyone else,” he says from his home in North Little Rock. “I was looking for a free meal, and that’s what I got. I started coming back and went to the drug and alcohol rehabilitation program.”

Holloway asked him to be part of the ministry and is now the center’s resident director.

The vegetable garden, he says, is “my way of giving back, and it’s been pretty successful. We get a lot of beautiful vegetables from it every year.

Sullivan, who grew up on a farm in the Springfield community in Conway County, adds that none of the money donated to the center goes to fund the garden. Instead, he collects aluminum cans from the center’s soft drink machine and resells them to a recycling center. This money is used to buy seeds, gasoline for his tiller and everything he needs to maintain the garden.

His favorite from the garden is the tomato.

“I have Arkansas Traveler tomatoes, Roma tomatoes and Big Boy tomatoes. They should ripen in about a week.”

Melissa Caulder is the center’s kitchen manager and uses the harvest from the garden to feed those at the Compassion Men’s Shelter on Roosevelt Road, across the street in AWAKEN and the Women’s Shelter at 4210 Asher Ave.

In the three kitchens, the center feeds around “600 to 750 people a day, depending on the day and time of the month,” she says. The center also offers take-out food baskets.

Hughes, who works as a cook in the kitchen, says: “People who come here to eat, eat well. If you’re worth a penny or a million dollars, you deserve the best you can get.”

Holloway says the center has recently seen “more people in worse shape”, due to rising food prices and inflation.

“There are a lot of people here who have fallen through the cracks,” Holloway says. “There are people coming in whose dollar can’t go any further. They live on a limited income, so if it wasn’t for the food they get here, they would miss a few meals a day.”

Holloway says he would like the garden to continue to grow. To that end, Sullivan plans to plant purple peas soon.

“People love purple peas, and they should be ready around mid-August,” he says.

Depending on the weather, the garden should support the center until September, says Hughes.

“We’ve had some rain lately, but the heat is there,” he said. “Now we’re going to have to start dealing with it.”

Sullivan and Hughes did most of the yard work, with Sullivan coming on days off – Tuesday and Wednesday – to tend to the crops. Volunteers are welcome to help with weeding, watering, harvesting and other tasks and can contact the center at https://lrcompassioncenter.org or by calling (501) 296-9114.

“Come help,” Holloway said. “We’ll find something for you. There’s a lot of work to do.”

For Sullivan, who first came to the center 15 years ago for the sole purpose of being fed, growing produce that helps feed others is rewarding.

“There’s this satisfaction of people coming here and enjoying a great meal, fresh produce that they normally couldn’t afford to buy in the store. We serve the best we can for those who want the service.”