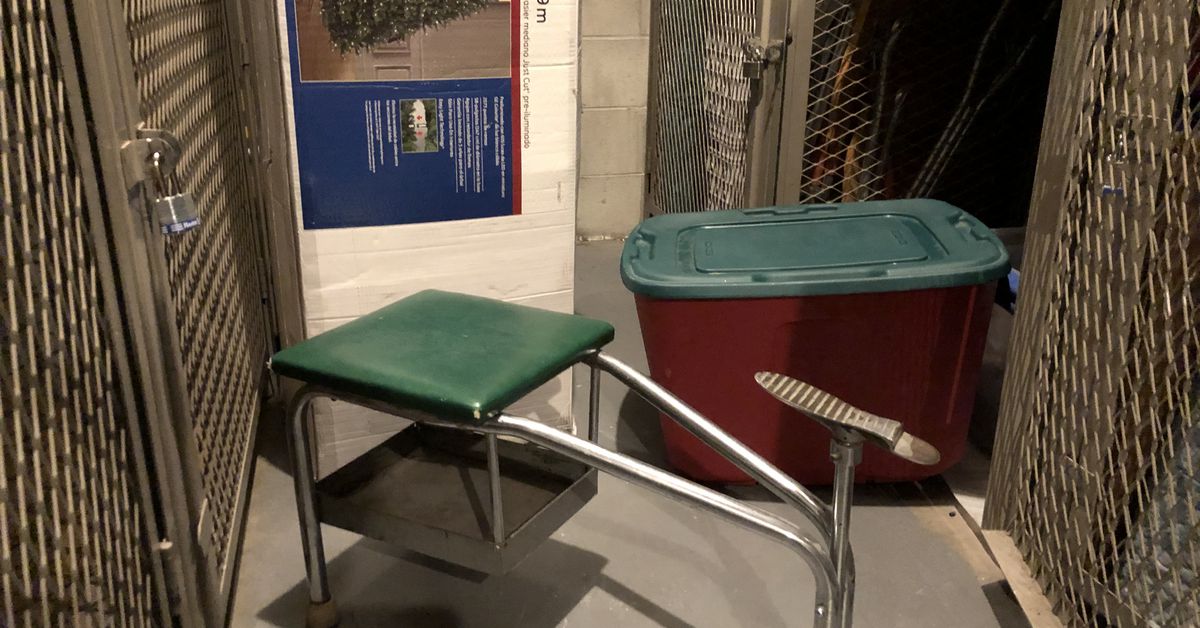 Hoarding tendencies tend to show up during the holiday season, as one columnist who owns a shoeshine stool can attest.

My wife accuses me of being a hoarder, which is terribly unfair.

Just because I’m both sentimental and thrifty, she mistakes my tendency to cling to stuff as some kind of disease.

Unfortunately, the holidays can reveal such tendencies.

For example, we have family coming to visit and I only have a few jobs left to prepare.

First, I have to put away that last plastic storage bin with Christmas decorations. Then I have to put my stuff on top of the dresser in the guest room.

It seems simple enough. But what you don’t know is that all the closets in the apartment are already full, as is the storage locker downstairs.

The same goes for the drawers where I would normally store dresser stuff because I never really sorted through everything I threw in them the last five times guests came over.

A day of judgment is at hand. I don’t want my sons looking in those drawers and deciding I’m a hoarder too. They already tease me about saving the good ribbon from unwrapped Christmas presents to reuse next year.

For 11 months out of the year, we keep our unused Christmas packaging and decorations in an off-site storage unit. Usually I can temporarily house the boxes inside the apartment for that other month.

This year is different because I cleaned out my desk at work and brought home five boxes of stuff, which now takes up space.

What’s in these boxes? Good question. I am not sure. Must be important. Otherwise, I wouldn’t have brought everything home, would I?

Anyway, I promise to sort it all out right after the holidays, but not now.

In the past, I probably could have found room in the downstairs storage locker for the plastic bin, but that was before I brought the shoe shine stool home.

You might be wondering what I do with a shoe shine stool.

This is also a good question. Before I answer, I have to swear to secrecy because my wife doesn’t know about the shoeshine stool and if she finds out she’ll accuse me of being – you got it – a hoarder. Terribly unfair.

The shoeshine stool is also from my office. Before that, it was in an antechamber behind the Daley Center’s seventh-floor press room.

When I started as a journalist in Chicago in the early 1980s, there was a shoe shiner who operated out of that back room, shining the shoes of lawyers and judges who stopped by to smoke cigars and kibitz.

Even back then it was a bit anachronistic and if I remember correctly the shoe shine stand closed soon after.

But the shoeshine stool was left behind, where it remained for years until the county decided to take over the space and had to clean up the junk.

Some reporters in the press room recalled that at one point I sentimentally remarked that I wanted the shoe shine stool if it were ever to be thrown away. So they released it for me.

Very kind of them actually, and I would thank them by name except to spare them possible repercussions – from my wife.

The shoeshine stool has remained in my office ever since, serving primarily as a footstool and conversation piece.

For many years I had this idea of ​​putting it to work as a column gadget in which I would take the stool out into the street and offer a free shoe shine to anyone who wanted to tell me a story.

The concept was that people would tell me their stories while I shined their shoes, then I would go back to the office and write them down.

One of the flaws with this plan was that it only seemed like a good idea on the afternoons when I was desperate to build a column, at which time it made more sense to stay in the office and try more strong.

On other days, the stool was a useful reminder that I might need to shine shoes as a possible fallback occupation.

This holiday season, I hope you accumulate nothing but good memories and can find humor in the complications that inevitably arise.

Here’s when gyms tend to be least crowded, according to an insider