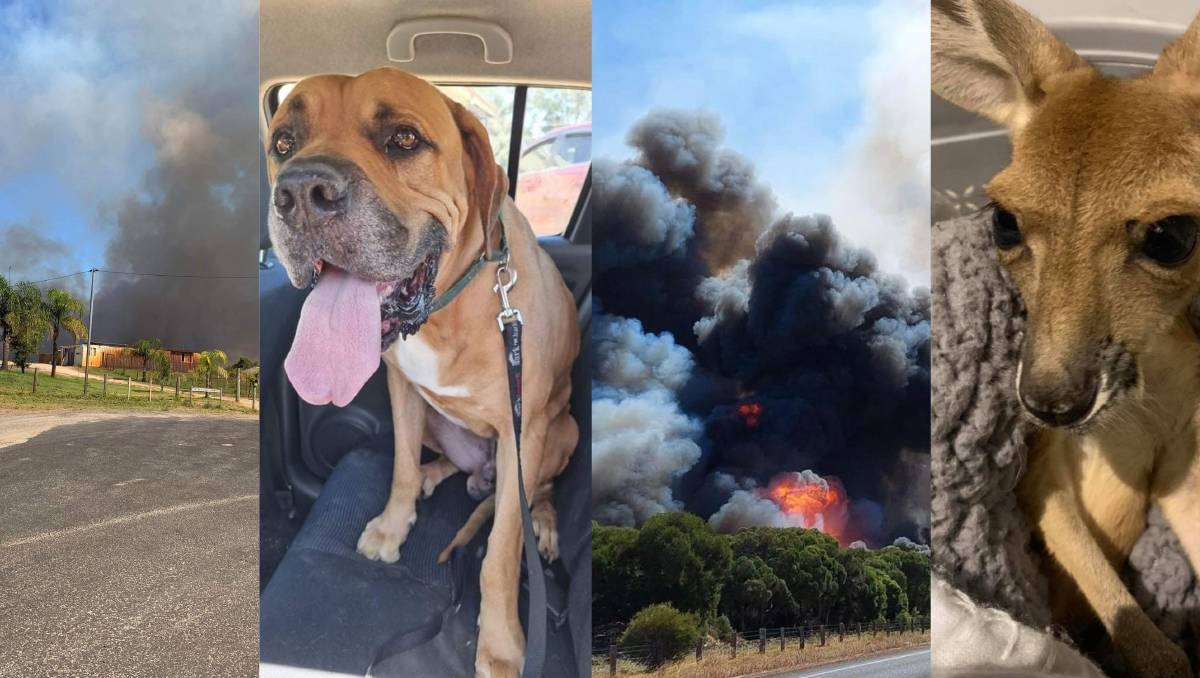 With a number of bushfires devastating the Western Australian landscape over the past week, the impact on local wildlife has been significant with thousands of hectares of land and bushland burned.

As the Nambeelup bushfire came eerily close to a number of Peel wildlife sanctuaries and animal rescues on February 2, volunteers had to spring into action quickly.

River Wren Wildlife Rescue, a treatment and rehabilitation center for sick, displaced, injured and orphaned wildlife, is located on Stake Hill Road, just down from where the fire was.

Volunteer Mel Coleman said she was giving the joeys their afternoon bottles when she saw the thick black smoke.

“I came out of the nursery and saw a black wall in front of the property,” she said.

“I ran down the driveway and down the street to find out where it was coming from – at the time I had no idea how close or far it was from us.”

When the volunteers discovered the fire was too close to be comfortable, they had to come up with a plan, but Mel said it was important they kept their cool.

“Animals are sensitive to the vibrations we give off, so it’s really important to stay calm in situations like this. All of our animals were relatively oblivious to what was going on.”

With more than 300 animals on the property and the DFES issuing ‘watch and wait’ instructions for their area as night approached, the volunteers had a tough decision to make.

The fire was stationary but unpredictable – if they returned home and the warning was updated with evacuation orders, it might not be safe to return and valuable time would be lost.

So Mel, along with the other volunteers, chose to stay at the property, sleeping under the stars for the night to ensure the safety of their animals.

“There was no way to leave the property and go home to our comfortable beds,” Mel said.

“The manager and her family live on the property, and for some volunteers, especially me, it is our second home.

“You wouldn’t stray from your home and leave your pets behind if there was danger nearby. You form a bond with all animals that are in care, and it’s our job to care for them. of them, so that’s what we’ll do, always.”

Mel added that while evacuating so many animals would not have been an easy task, the River Wren team “would have made it happen”.

The K9 Dog Rescue team in Nambeelup were also affected by the fire and once their location was placed in the DFES red zone they were forced to evacuate.

The organization’s president, Jake King, said their nightmarish experience began around 2 p.m. when they spotted smoke southeast of their main training grounds.

“It was a very hot day and the wind was up – we didn’t really see it as a threat to our property at first as it seemed to be quite far away,” he said.

“Within half an hour, the smoke seemed to get closer, darker and thicker. That’s when the sirens started. A short time later the water bombers appeared.”

As the sirens grew louder and the activity in the sky increased, Jake and the K9 team knew the threat was getting serious.

After monitoring the DFES website all afternoon, their location finally fell under the red bushfire emergency warning, and they knew they had to act immediately.

“We knew it wasn’t going to be easy, but it had to be done.”

Jake said they were inundated with phone calls and Facebook posts from people offering their homes to the rescue dogs.

We knew it wasn’t going to be easy, but it had to be done.

“Strangers and volunteers were putting their hands up to risk their own safety. We had so many volunteers come to our property with their personal vehicles that within an hour of making the call, we had safely transported all of our residents to the various pounds, HHSACs and homes.”

FEAR: Another fire in Denmark, WA sparked fear among residents as it closed in on residential properties. Photo: David Kennedy.

Mandurah, Murray and Rockingham books as well as the Halls Heads Small Animal Clinic opened their doors to provide emergency shelter for animals, and Jake said there was an “amazing community” there who brought a ” beacon of light” during the stressful period.

The Nambeelup fire is currently under control, with an “advisory” alert issued for those in the area. Warnings have also been downgraded for the Rockingham/Shire of Kwinana fire, which first broke out on February 3 and has since burned 96 hectares of land.

Across the state, Bruce Rock, Narrogin, Narembeen, Denmark and Bridgetown also received various emergency warning states due to bushfires threatening homes and lives over the past few days.

The Bridgetown Fire has burned 2,227 hectares and a Hazmat warning has been issued in the townsite of Hester.

BATTLE: Firefighters are battling the Bridgetown Fire and a Hazmat warning was recently issued due to a wood treatment chemical. Photo: Evan Collis, DFES Incident Photographer.

The Hazmat incident was caused by bushfire damage to wood treated on site, the substance identified was copper chromium arsenate and residents within 500 meters of the wood treatment area were asked to leave the area if they had stayed.

Residents are also asked not to use water from their water tanks, use outdoor play equipment/furniture or eat produce from their garden.

The warnings remain firmly in place heading into the new week and the DFES is updating them regularly.

According to the Australian Bureau of Meteorology (BOM), the South West District has a slight chance of showers today, with south west winds of 25-35 kph.

For the rest of the week, the South West District is expected to experience light winds of 15 to 25 km/h from the southeast through Thursday.

The Lower West District which includes Peel is expected to experience south to southeast and easterly winds of up to 25-35 kph with Thursday’s forecast for warm and sunny weather.